ACCRINGTON TO BE TRANSFORMED TO 1940’S FOR D-DAY COMMEMORATIONS PLUS ALLO ALLO’s CAFÉ RENÉ COMES TO ACCRINGTON FOR THE DAY! 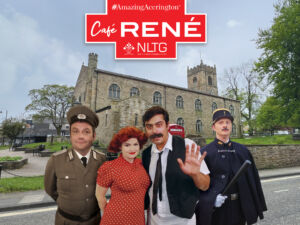 The full size Spitfire static display will be positioned outside the market hall from 10am-4pm, with visitors able to take pictures with the Supermarine Spitfire, while there will also be historians providing further information on the plane.

The iconic Supermarine Spitfire was critical in defeating Luftwaffe air attacks during the Battle of Britain in 1940, with more Spitfires built than any other British combat aircraft before or since World War II – 20,341 in total.

Organisers of the free to attend event #AmazingAccrington, who are running the re-enactment as part of the 2022 Accrington Food Festival, are also inviting people to attend in 1940’s dress to create a magnificent 1940’s scene which will also feature 1940’s singers within the St James’ Church grounds on Cannon Street and later on the town square, with plenty of opportunities for visitors to enjoy a swing dance.

Accrington-based training provider, North Lancs Training Group (NLTG) will be serving tea and cakes from the café (weather permitting), which is open to the general public from 10am-12pm, with all donated proceeds going to the church. 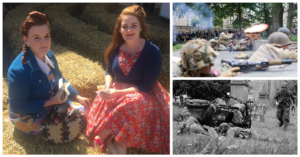 Gareth Lindsay, Managing Director of NLTG, said: “North Lancs Training Group can’t wait to be involved with the pop-up Café René and we would love to see visitors of all ages there for a brew and a croissant. Plus you’ll even get the chance to see characters from ‘Allo ‘Allo!”

From 12.30pm, BBC Radio Lancashire presenter and Accringtonian Stephen Lowe, will then officially introduce the ‘Allo ‘Allo characters who will be performing in the church grounds ahead of the war re-enactment, with MP for Hyndburn and Haslingden, Sara Britcliffe, and NLTG MD Gareth Lindsay, both taking part.

The re-enactment will come to an end at 1.15pm with a performance from a Lone Piper from the Accrington Pipe Band, which will include the national anthem as a tribute to mark the Queen’s Platinum Jubilee celebrations.

Sponsored by Property Shop and NLTG, the Food Festival will include international, regional and local food markets, as well as Hyndburn Independents both inside and outside Accrington Market, as well as a main stage featuring Netflix TV star and celebrity chef Molly Robbins, local chef Paul Fox of the Crafty Fox and a Ready Steady Cook Food Pantry challenge including Hyndburn Food Pantry.

Murray Dawson, Chair of #AmazingAccrington, said: “With the Queen’s Platinum Jubilee taking place from 2nd-5thJune and the D-Day anniversary falling on 6th June, we felt that the Accrington Food Festival on 11th June was the perfect opportunity to commemorate D-Day.

“We have run the re-enactment for many years now and it is a spectacular show for everyone to watch. We have mixed it up this year with Café René to add a new attraction. We would love to see people coming down in 1940’s dress and we are encouraging everyone who wants to, to do so, so we can create a fantastic 1940’s scene.

“We are also asking anyone with any old military vehicles to bring them along to the event, which will also include a full size static Spitfire display – if you do have something which you think is suitable, please contact us at editor@amazingaccrington.co.uk.”

Keep up to date with the latest updates on the event by visiting www.amazingaccrington.co.uk