UK Vapour Brands (Totally Wicked) played host to the most recent #AmazingAccrington meeting, held on Thursday 13th September at the Old Fire Station in Accrington where their Head Office is now based.

Chairman, Murray Dawson of Scott Dawson Advertising, opened the event by welcoming business leaders, some attending for the first time, to the meeting. 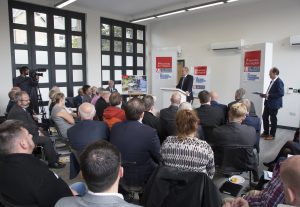 The Old Fire Station was alive once again with activity in all its new glory as Head Office for UK Vapour Brands. Business leaders were given a tour of the Grade II listed building which was purchased for £200,000 and has been developed over 15 months at a cost of over £2 million.

Murray took the time to introduce the first speaker, ‘local boy’ and Managing Director of UK Vapour Brands, Fraser Cropper. Fraser was born and bred in Oswaldtwistle, spending his first few years of schooling at Paddock House School. He left the area in 1982 immediately after finishing school aged 16 and joined the Royal Navy. It would be 28 years later upon leaving the Navy with rank of Commander and a practiced Aeronautical Engineer that Fraser would end up looking for something commercial and be drawn back to the place he was born.

As fortune had it, Fraser’s brother had recently opened one of the first vaping business in the UK and at the end of 2010, he was convinced to join the fledgeling business, called Totally Wicked. Eight years later, Fraser is the MD and majority shareholder in a much transformed and larger business, but a business that still has its roots in Lancashire. 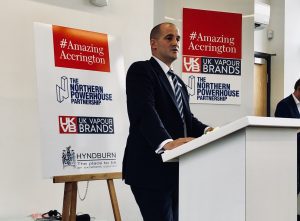 “I just wanted to get through school and simply get through and get out of this town. I never thought there was a future for me. I had to be drawn out of this place and go and find an adventure somewhere else. Not that I have anything detrimental about my background it seemed to be constrained. In September of 1982, I joined the Navy. It was a bit of a shock really – from day one I just wanted to come home. The only thing that kept me there was eternal embarrassment, so I stayed of course!”

“I left my service with self-confidence and thought there was something I could do with my life beyond following the pre-ordained path. After working for a company called Cobham for just over a year, I joined my brother’s business that sold vaping stuff – everyone told me I would be a madman to join; telling me I had a career in engineering and that my brother was a bit edgy. I ignored it all and followed my wife’s counsel and I’ve been here ever since. When I first joined it was just a website and an old warehouse. Two years after I joined we doubled our turn over, employed more people. I was left looking after this business I hadn’t founded.”

“I wasn’t the founder of Totally Wicked, I was the brother of the founder of Totally Wicked. He knew he needed to break into a sector and he forged what is the epicentre of the vaping community in Lancashire. There is no small coincidence that it is indeed the place where Totally Wicked started – a collective of four vaping companies in Lancashire. International businesses turn over £150-180 million every year in this borough. We have been forging what is the most permissive environment for vaping in the world by the hard work we’ve had to put into the business.”

“Every single day we were threatened over our business. We broke through it. We shattered that paradigm that it would always be like this because of absolute brutal, sheer desire.”

Fraser shared with attendees how he attributes the success of the business not to the money it makes but to the level of trust customers have in them and how happy their employees are to work there – plus 5% of the business is shared between the employees as an additional incentive. Employees also work in some of the best working conditions in the borough with a gymnasium and outdoor relaxation area on the top floor. 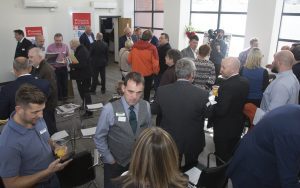 “It’s an amazing story of how our economy is still an economy of people who are prepared to take that risk; prepared to innovate. What I often remind my colleagues in government when we are talking about the contribution of the city of London, is that every time Britain’s economy has taken a step forward, it has been the North, not the South, that has been responsible. We created the steam engine, we created fracking just a few years ago in Manchester. The South needs the North of England to succeed so that Britain can succeed. And that, in one long sentence, is what the Northern Powerhouse is about.”

“The second thing it’s about is transport. When it was launched in 2014 it was based on a very simply idea – that if you connect the economies of Liverpool, Manchester, Leeds and Sheffield, you will have an economy larger than London that covers about the same geographical area. Every day people think about commuting the distance of the central line in London but wouldn’t think about commuting every single day from Liverpool to Leeds because of the transport infrastructure. Connectivity is terrible.”

“We acknowledge that problem. Our mission must be to improve connectivity across the North of England. We are spending over £3 billion on improving our motorways – our largest investment in road infrastructure since the 1970’s. 98% of commuters commute via road, which is important to note.” 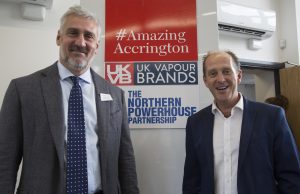 When asked how the ordinary man or woman on the street in Accrington will benefit from the Northern Powerhouse vision, Jake responded: “It’s about ensuring they are culturally rich; about ensuring they have good schools; about improving the lives of a whole person.”

The meeting was incredibly insightful and successful. Murray Dawson commented:

“#AmazingAccrington has a business leaders network and is an initiative that promotes a sense of civic pride in Accrington and surrounding district townships within Hyndburn; celebrating the success of its people and businesses – encouraging the youth of today to stay in the borough tomorrow. It’s important to engage with local businesses and education as well as the local community in order to build aspirations for people to stay local and realise that they aren’t constrained and can build a successful, worthwhile career and life staying in their hometown.”

The next #AmazingAccrington meeting will take place on Thursday 6th December at 12:30 pm. For more information or to register your business visit www.amazingaccrington.co.uk