“I vividly remember getting out of the car, climbing the embankment and the first car I see going around the track is this Peugeot 205T16”

“I vividly remember getting out of the car, climbing the embankment and the first car I see going around the track is this Peugeot 205T16” 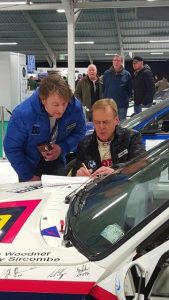 Myself with Ari Vatenen, signing the car at Race Retro in 2016

There are only a few days left until I get the Peugeot 205T16 (insured for £250,000) out again – this time in #AmazingAccrington for their Town Takeover. We’re fast approaching 13 years to the date of the start of this journey and I’m feeling nostalgic.

Saturday 13TH September 2005 is when it all started.

It was a wet day; the weather was wreaking havoc and I was nursing the flu … all I wanted to do was stay indoors in the warmth.

One of my friends came around and asked me to visit Rallyday in Castlecombe – it took a lot of persuasion, but I eventually gave in and agreed to go. The weather was just worsening on the way over, but we were determined to have a good day.

We arrived. I vividly remember getting out of the car, climbing the embankment and the first car I see going around the track is this Peugeot 205T16. My mind was immediately thrown back to the Golden years when they were at their pinnacle – it’s not often you get to see one out, even back then!

It was as though the atrocious weather had disappeared (alongside my flu) and I found myself running down the embankment like a kid in a sweet shop, following the car off track where it stopped outside a motorhome. 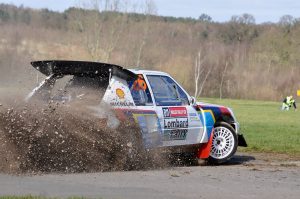 I walked over and this lady appeared, I asked if I could speak to the owner of the car – she went inside then a few moments later out walked Kevin Furber. I asked if I could see the car and, you know, one memory that will always stick with me is despite the horrendous weather, he had the courtesy to show me around the car. As soon as the rear of the car was lifted the crowds flocked and I ended up right at the back of the crowd … I’d lost my chance to discuss the car.

I’d already decided in my mind at this point that I wanted to buy it – with no rationality to the idea of it, let alone the costs!

I eventually managed to approach Kevin again to put forward my idea which he swiftly, but politely, declined. He had many ties with Peugeot being an ex-works driver and deeply involved in the 205 Challenge. I was disappointed but I understood, giving him my business card for good measure and asking he grant me first refusal if he ever had a change of heart.

Looking back, I feel there was a certain irony and fate associated with the events of that day. 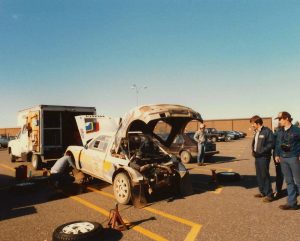 The late Richard Burns was there – I think the organisers had arranged for his co-driver Robert Reid to do a lap of honour driving Richard around … much to the delight and applause of the crowd. I think that was one of his final appearances, come to think of it.

I left the show at that point and returned home, back into the warmth to get better.

I did later find out that the Peugeot 205T16 had won Car of the Show and the rosette was presented by none other than the late, great, Colin McRae! Kevin still has the photo of them both leaning over the bonnet with their hands shaking in the middle. I knew Colin well, and this made the vehicle even more special, made me want it even more!

Weeks passed with no word … then out of the blue one day, a phone call came.

“Is that Andy Medlicott? It’s Kevin Furber here. I have thought a lot about your offer, can you come up to York where the car is for a chat?”

We arranged a day and off I went. 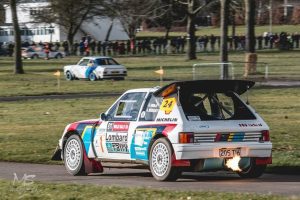 The Peugeot T16 at Race Retro in 2015 spitting fire

On my arrival I saw her, no mistaking – there she was.

We went for a test drive and, well what I can I say? It was exhilarating!

When we got back Kevin put forward a proposal.

“I can’t let go of the car. It’s rare and I’ve not long had it since buying it from Peter Johnson from New Zealand. I have so many plans on what I want to do with this car, but you can purchase 50% ownership. If you’re in agreement, we can discuss costs.”

It didn’t take me long to make my mind up. 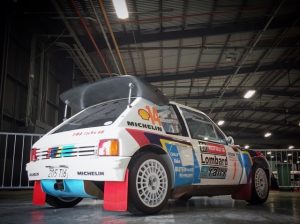 #AmazingAccrington’s Town Takeover will be welcoming our beloved Peugeot

Upon my agreeing to 50% ownership Kevin passed me a piece of paper with the costings on. He explained it was a fair valuation. I opened it up and you should have heard the sharp intake of breath that I took seeing the figures! It felt like a “what on Earth are we doing!?” moment, but we forged a partnership and here we are 13 years later still going strong.

As an ex works Peugeot driver, Kevin does most of the display driving because the car is still very fast and aggressive and needs to be treated with respect however, I have had the opportunity to drive on several display events and test it. I remember driving in front of ten thousand people in Holland and feeling very nervous, not wanting to make a mistake but also feeling the need to put on a good display for the crowds, I’m always blown away with the crowds reactions to this car and I’m very humbled when people ask for my autograph.

Thanks to the Peugeot 205T16 we have been to places we never would have been and met people we never would have met. This includes many works drivers of the Group B era who have subsequently put their signature on the car – Ari Vatenen, Yuha Kankkunen, Miki Biasion and Harri Toivonen to name but a few. 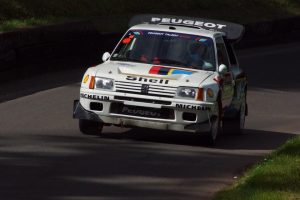 The great Paddy Hopkirk has even donned his signature on the car … funnily enough at an #AmazingAccrington event a few years back!

The car was originally built by Peugeot sport UK for an American rally driver called John Woodner, John was suddenly killed in an aeroplane stunt accident in 1989 and the car was in his family storage for almost 20 years. A New Zealand businessman managed to persuade John’s widow to sell the car and restore it to its former glory to honour his memory and the unique history of the car’s build as it is the only Peugeot UK built factory car in the world. Its chasse number is 007 from the limited-edition original build of 200 road cars, the first 20 of which were allocated for competition use. 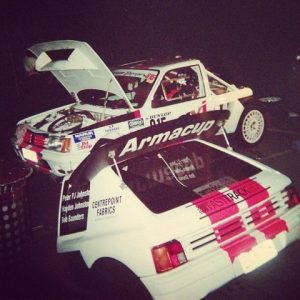 I have thoroughly enjoyed my time with the car and it gives me an immense feeling of satisfaction to carry the torch for Group B … a period in my life which carries a special place in my heart. I can’t wait to get her out again this weekend in #AmazingAccrington!

Today, everything is lost in our memories. But our hearts still remember those days of courage, speed, fights and madness that was GROUP B! 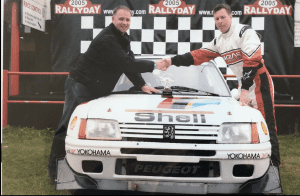 We are so privileged to have Andy coming along to #AmazingAccrington Town Takeover this coming Saturday. Come and see the car in person or speak to Andy to find out more about it! He will be displaying outside

Accrington Market Hall on the new Town Square from 10am – 4pm.