When he decided to invest in the club he made it very clear that this was not a money-making enterprise but rather an attempt to keep the club alive.

Andy sees himself as very much the custodian. A person who is just one in a long line of people who have had the privilege of being in the driving seat of the famous old club since it was originally founded in 1891.

As he puts it: “When I’m not here the club will go on. It’s just my job to leave it in a better state than I found it. ”

After some tough years, there is a real buzz around the Wham Stadium at the moment – an air of positivity emanating from the stands and embraced by the players, coaching staﬀ and, of course, the owner.

For the latest edition of #AmazingAccrington I sat down with Andy in his stunning oﬃce at his What More UK premises to discuss Stanley, the wider footballing world and overfeeding your dog.

“Accrington is a great club, people don’t know it, the council doesn’t know it, the town doesn’t know it, and the football world doesn’t know it. If you look at my Twitter title it says ‘Best Club in the 92’ and I’m telling you it is. You get the best experience there. Much better than Burnley or Blackburn. Miles better. You’ve got atmosphere, you’re next to the pitch, home and away fans can go in the bar and mix, there’s no police. I went in the toilets yesterday at the ground, they’ve been up now a year and three months and they’re spotless. I’m saying nobody has burned cigarees on the door or ripped handles oﬀ. They know it’s theirs, it belongs to the fans and they keep it right. You don’t get that at other clubs. ”

THE INS AND OUTS 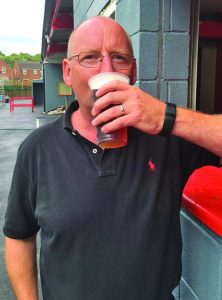 Andy is just a fan on matchdays

Andy has recently completed his business in what has become one of football’s necessary evils, the dreaded transfer window.

For many, the transfer window constitutes a chance to take a vicarious peek into football’s multi-billion pound industry at the very elite level of the game – a place where money seems to have no end and business is being conducted between oil oligarchs and even the representatives of nation-states in the case of Paris Saint-Germain.

For Andy, the transfer window is about bringing some extra revenue into the club and ﬁnding the diamonds in the dirt that nobody else is looking for.

Stanley lost fan-favourites Shay McCartan and Matty Pearson in the previous window but Andy still believes that the current crop is even better than the team that came so close to a playoﬀ place last year.

Recently Sir Alex Ferguson chaired a meeting of UEFA ’s elite coaches and one of the items on the agenda was the possibility of closing the transfer window before the season kicks oﬀ, a policy which has been subsequently ratiﬁed by the Premier League. Andy believes this may be all well and good for those at the top but it doesn’t do much for clubs in Stanley’s ﬁnancial position. “We’ve got Callum (Johnson), Farrend (Rawson) and Max (Stryjek) who all came in on loan on deadline day. We’d prefer to have less loans and more signings but it’s not easy for us because we don’t buy players. That’s the reason I want it to stay open until the end of August, it doesn’t aﬀect Manchester United. When they’ve p****d about in the transfer market before end of June, all the rich ones p**s about, all trying to hold out to get as much as they can and at the other end is Accrington Stanley scratching about for what’s left, and what they’re saying is they want to close that bit. Why would I ever hope for that? Before they invent rules, they should look at the impact on the majority of football that isn’t the Premier League” 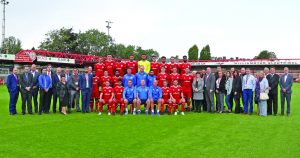 LOOKING TO THE FUTURE
There is a real feeling that the tectonic plates are moving beneath the Wham Stadium; planned upgrades and renovations to the ground and new sponsorship deals are all indicative of a club very much on the march forwards.

So we are not looking for 100% improvement every year. ” The life of a chairman at a football club can be a poisoned chal 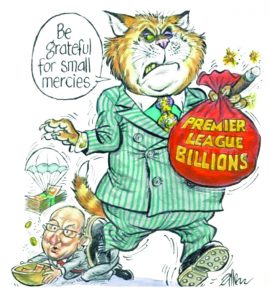 Andy depicted as a cartoon

ice. On the one hand, you get the opportunity to share in the victories and successes when, or if, they arrive but if you are not seen to be doing enough for the club, and that usually means not pumping enough of your own cash into it, you can be reviled. Andy is all too aware of the diﬃculties of being a chairman but is pragmatic about the issues he may face if the club doesn’t make signiﬁcant strides.

“Nearly every chairman goes away and gets hated and I don’t expect to be treated any diﬀerently than anyone else. I’m not reinventing the wheel, I’m just doing it how I’m doing it. I go away and talk to other chairmen at clubs in our league and they’re telling me what they’re losing and how much they’re putting in year in year out and I’m saying ‘Why? You’re not helping’ . What you’re doing by sponsoring the club for a couple of million is forcing up everyone else’s costs. It’s a bit like overfeeding your dog until you kill it, until it gets fat and dies, that’s what these guys do and then they get sick of doing it. ”

Every decision made at Stanley is designed to ultimately improve the ﬁrst team squad. The additional revenue streams, brand-new pitch and stadium renovation are all designed to improve the fortunes of the team on the pitch and, so far this season, the policy seems to be bearing fruit. Next on the agenda is the new training ground – an exciting project which Andy is looking forward to moving forward with as soon as possible.

“I tweeted out that the next thing we are doing is the training ground but having to deal with the Council gets on my nerves – they’re a handbrake. But I suppose they have to be a handbrake on progress because there are people that take the p**s. If they didn’t stick to the rules you’d end up with houses built upside down with no footings and falling down and everything, so there has to be a process. All I ask is that they support us as much as any town supports their club.”

GIVING BACK
Increasing support for the club is something which Andy is very passionate about. You get the strong impression that he gets a real feeling of civic pride by trying to improve Accrington Stanley, something he sees as an asset for the entire town. He uses the phrase ‘community club’ rather often, so when asked what that phrase speciﬁcally means to him he doesn’t hold back.

“It’s a good question and it’s a key question and it’s actually why I let Murray (Dawson) convince me to buy the club in the ﬁrst place. When I were little I were a pain in the arse, as you can imagine, but there were a youth club and we used to go there, play British Bulldog and God knows what until we were knackered and you had to behave because they would give you a thick ear. You would go home to bed knackered. It were a good part of the day, there were things to do – now there isn’t. We’ve put money into things like that, where we are geing the kids oﬀ the streets and they can really get the beneﬁt that I got from that period. The Clayton Boxing Club gives them something to do, the rugby club gives them something to do, 150 kids something to do at the weekend. It’s by donating cash to them and using it as funding to get more cash for them to build facilities – I’m puing a bit back that I got out. So I see it as a big black hole where no one is doing enough, governments, nobody is doing enough. But there are people out there doing their bit and trying. ”

‘Giving back’ is a concept which comes up a few times during the course of the interview and Andy is proud to have a vehicle in which to pass on funding to the wider community.

One of the ways which Andy has chosen to interact with the Stanley fans is through Twitter. He was a relative latecomer to the social media platform and decided to start tweeting once he had taken over the club. Now he is rather proliﬁc.

“I still don’t know how to use Twitter properly, that’s not my name, I’ve spelt it wrong, it says ‘@AndyhHolt’ but it should be an ‘M’ in the middle, but I’ve thought ‘b******s, leave it, ’ I can’t be a***d to change it. A lot of what I say on there isn’t media worthy, it’s important to us. Our fans need to know what’s happening and I’ve no other way of getting to them. I think it has its downsides like all social media and I ignore a lot. Someone keeps sending me pictures of t**s and I’m sick of blocking them. I get loads of that, it has its downsides but just got to keep deleting them.

JUST PART OF THE TEAM
Andy Holt may be the majority shareholder of Accrington Stanley but he is also a fan. You can see him at the Wham Stadium doing his trademark lean against the doorway of the bar watching the match with the same enthusiasm as all the fans that paid their money through the turnstiles. To Andy, it’s an incredibly enjoyable and rewarding experience.

“There’s nothing quite like being under the ﬂoodlights at game time. I am just a fan, it’s a rewarding experience. Even though it cost me I get a lot out of it. I get a buzz out of players moving on, out of Matty (Pearson) playing in the Championship. I get a buzz out of the kids coming out of virtually the same area that I come from and getting a real-life chance right in front of my eyes which is what it’s all about. ” Finally, I ask Andy about his predictions for the season ahead.

“I SAY WE ARE GETTING PROMOTED THIS YEAR. NO MISTAKE OR DEBATE IN MY MIND.” 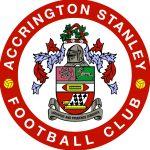