AN ESTATE agency has scooped a prestigious industry award at a glitzy ceremony in London.

Duckworths Estate Agents, based in St James Street, Accrington have been officially crowned the second best estate agency in the entire region, after winning the Silver Award in the ‘Regional Agency of the Year: North East & North West’ category at the Negotiator Awards – the industry’s most esteemed awards ceremony. 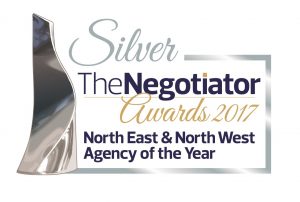 The event, which was hosted by comedian Jimmy Carr, was held at the London Hilton, Park Lane, and played host to over 700 guests from the best and most respected estate agencies; all hoping to take home an award, with most leaving disappointed.

The eventual winners of the award were Thomson Hayton Winkley estate agents based in Kendal, Cumbria, effectively making Duckworths the best estate agency in the whole of Lancashire.

Jonathan Parkinson, Director of Duckworths Estate Agents, said: “We are absolutely delighted to have won this award. To be considered the second best agency in the entire North East and North West of England is a fantastic accolade. It is also a testament to the hard work, dedication and commitment to first-class service that the team show every day. This award is for everyone who has contributed to continued growth and success of Duckworths.”

The lettings arm of Duckworths, Discover Property Management, was also shortlisted in the category of Small Lettings Agency of the Year.

Established in 1877, Duckworths are one of the oldest estate agencies in the region. Their head office is based in St James’ St, Accrington, and they also have an office in High St, Rishton. Discover Property Management, Duckworths’ letting arm of the business, is based in Union Road, Oswaldtwistle.