From humble beginnings as a trainee welder of Accrington, Dominic Brunt now plays Paddy Kirk in the critically acclaimed drama series Emmerdale. Dominic took the time to chat with us over lunch at Roots Restaurant in Accrington and Rossendale College. He reassured us that he hasn’t let fame go to his head. 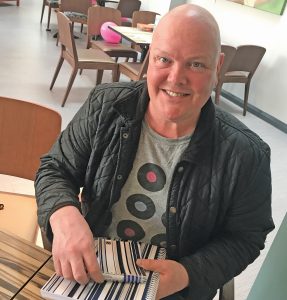 “You don’t have to be a show oﬀ to be an actor, you just don’t. That’s been an important lesson for me. I’m not a raconteur. I won’t get up and start telling stories at a party. I’m shy really. It’s totally diﬀerent when you’re acting and you’re just in front of two boom operators. ”

After leaving school Dominic trained as a welder for Hargreaves Sheet Metal, making metal panels to ﬁt onto Accrington buses. “I think if I ever stopped acting I’d go back to being a welder. ” He began his formal training studying a BTEC in Performing Arts at Accrington and Rossendale College.

“The drama teacher there, Martin Cosgrif, had a knack of getting people into drama school. He turned me from a welder into an actor. He told us on the ﬁrst day that we should look at it like a job. We had other people turning up to acting classes thinking it was like X-Factor so he used to start oﬀ with intensive breathing exercises and Shakespeare which chased them away. For the rest of us, we were obsessed with acting.”

Dominic will always be grateful for his education at Accrington and Rossendale College. “I trained as a welder here and then as an actor so the college has done brilliant things for me. ” He went on to join the alumni of the Bristol Old Vic Theatre School, whose previous students include Daniel Day-Lewis and Patrick Stewart. This was also where he met his wife Joanne. 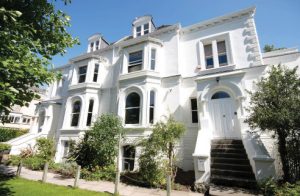 Since 1997, Dominic has been best known for his role as Paddy Kirk in Emmerdale, a character who has changed drastically in recent years from loveable bumbling vet to absconding love-rat.

He admits that he initially had his reservations about the changes but Dominic now enjoys the role even more. “I like the fact that he’s ﬂawed. I think he has three dimensions and he’s not a saint. He’s as ﬂawed as everybody else. It would have been dull for him to have been there for this long and still be this upstanding person who was a pillar of society. ”

We asked Dominic if he was ever tempted to ask the writers to alter the storylines. “No. I don’t think we should or every actor would be going up and asking ‘can I have a storyline, can I have an aﬀair, can I be ill? ’I just leave it to them, that’s their job and they’re brilliant at it. ”

The critics certainly think so. Emmerdale has been enormously successful, particularly in recent years, with the show winning the Best Continuing Drama Series at the British Television Awards 2017. “It’s been amazing because we’ve always believed in it so it’s been great to be vindicated. About ﬁve years ago we were on top form under a producer called Gavin Blyth. The writers had matured and we went from being a soap to a serial drama.

We were really excited about it and yet we were still ignored. I think it takes people a while for their perceptions to change, especially about something like Emmerdale which had been a certain way for a long time. All of a sudden now we’re getting the recognition that we believe we deserve. We’re all over the moon and certainly not taking it lightly, we are all very grateful.” 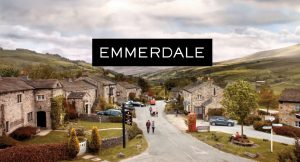 We spoke with Dominic about his childhood in Accrington, which he remembers very fondly. He recalls working on a stall on Accrington Market as a teenager. “The stall owner would give us a load of towels to sell and then he’d go oﬀ to the pub for the rest of the day. At the end of the day, we’d give him all the earnings and he’d give us £3.50 each. It seemed like a lot at the time.

“I absolutely loved the market. I remember there was a whole underworld underneath it that stretched for miles. We used to spend hours down there. You could walk directly underneath the Arndale, carry on walking then pop up where the police station is. We’d go down there looking for dog rats. ” Dominic explains that there were rumours of giant rats, a result of dogs interbreeding with rats. “There was obviously nothing like that down there but when you’re young you’ll believe it. ”

When he wasn’t working on the market Dominic would spend his time playing arcade games. “We used to spend a lot of time in the amusement arcade just opposite the town hall. We spent hours and hours down there. I was never a gambler but I was a massive gamer. My favourites from the time were R-Type and Kung Fu Master. Oh, and Galaga which I’m still really good at! I’ve even got a stand-up arcade machine at home with all the games loaded into it which has followed me all my life.” 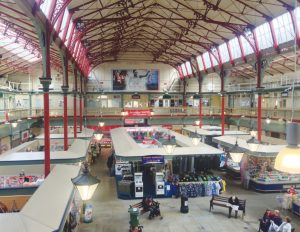 Accrington Market where Dominic worked on a stall as a teenager.

Dominic’s fascination with horror and zombie ﬁlms all started in a video shop in Accrington, he tells us. “A friend of mine’s dad owned Accrington Video at the bottom of Burnley Road. A brilliant shop. The front of it is still there but it’s just a shell now which is really sad. We both liked horror ﬁlms and that’s where we got our zombie ﬁlms from. We used to watch tons of them.” A self-confessed zombie fanatic, Dominic has recently branched out into directing and starring in horror ﬁlms. “Every two or three years they (Emmerdale) let me go away and do ﬁlms which is great. They’re brilliant like that. It’s really supportive. ” Films such as Inbred (2011) and Before Dawn (2012) have achieved international success and a cult following. “I directed Bait and Before Dawn and I’ve just directed Adult Babies which had its Leicester Square premiere in August. I’ve also just bought the rights to a book which we’ll be ﬁlming in a couple of years so I’m swapping between two ﬁlms at the moment.

“We’ve been very successful, we’ve been distributed in Japan, Australia, America and Germany. We’ve been very lucky. Slowly we’re gaining ground which is great. ” However, when asked if he sees his future going forward as more of a director than an actor, Dominic was quick to answer. “No, I see staying at Emmerdale as long as I possibly can as the way forward!” 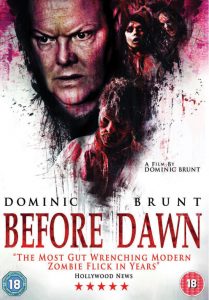 ‘Before Dawn’ a film directed and starring Dominic Brunt

Q. Favourite TV show as a kid?
A. Tiswas. Some of my friends weren’t allowed to watch it because it was naughty, they had to watch Swap Shop. We were the stray kids!

Q. What do you do when relaxing?
A. I play the mandolin. I watch a lot of ﬁlms. I’m always busy in either pre-production or post-production of a ﬁlm so I enjoy doing that. I read a lot of comics as well.

Q. First car?
A. A minivan that I was doing up that chickens would live in.

Q. Worst thing about acting?
A. Remembering the lines. 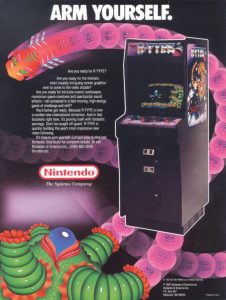 Q. What part in a ﬁlm would you like to play?
A. Any part in Whistle Down the Wind. It’s my favourite ﬁlm of all time.

Q. Last gift?
A. A pile of comics for my birthday.

Q. Any pets?
A. A tortoise, chickens, a ﬁsh and a hamster.

Q . First bike?
A. I had a Grifter and then a Budgie