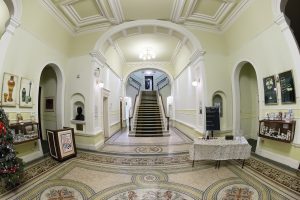 Climbing the stairs up to the Ballroom in Accrington Town Hall, I could hear the hustle and bustle of people, Christmas music playing, and the harmonising sound of children’s laughter … the perfect combination for festive fun at the Christmas Craft Fair. The warmth of room hitting my face was welcoming; a chance to get out of the cold and see what the festive fair had to offer. I made my way through the door and was greeted with smiley faces. 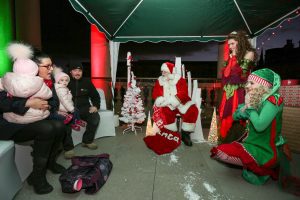 Intrigued by the closed curtains ahead of me that were hiding double doors leading out on to a balcony overlooking Accrington Town Centre from The Ballroom, I sneakily peaked through a gap to see Santa and two of his helpers in a delightfully decorated grotto. He was speaking to Olivia and Florence Hindle, who were both telling him how well-behaved they have been this year so far; Santa made sure to remind them to continue their good behaviour for the rest of the year and they politely said they would before sprinkling sparkly wishing glitter with Santa’s elf-helper.

With a smile on my face from seeing such innocent delight on the faces of children, I went on my way to see what else the #AmazingAccrington event had to offer. 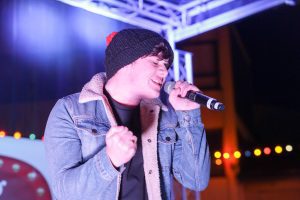 On my way down the stairs, I bumped into one of this year’s entertainers, 2016 X-Factor star, Ryan Lawrie (https://www.facebook.com/OfficialRyanLawrie/) who was more than happy to have a chat. He showed genuine excitement to be performing at such an event, telling me how he loves doing gigs for smaller towns: “I have performed in big cities all over but there’s just something special about coming to smaller towns like this. It’s more intimate, it’s different, but it’s different in a good way.”

Working in the PR team at Scott Dawson Advertising in Burnley has many perks; one of them being exclusive access-all-areas to events that the company is involved with. I was halfway down the stairs when I noticed a large blue door to my left; with curiosity taking over I decided to have a peek to see what was hiding behind it – the exclusive access allowing me to do so. I opened the door to be greeted by the smiling faces of the evening’s performers. The first person to catch my eye was 2016 X-Factor star, Sam Lavery (https://www.facebook.com/SamLaveryMusic/) so I thought I’d go over to her and see if she was up for a chat. 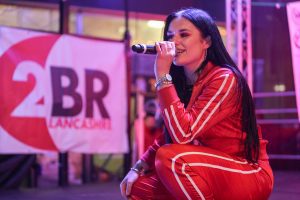 Sam was a little hesitant to talk when I first approached, I assume with not knowing who I was. After introducing myself and explaining where I worked and that I was at the event just to talk to people and to get to know the people involved, she was more than happy to talk to me. Sam told me about how Christmas is her favourite time of the year and her delight to be invited to help kick-start the Christmas fun in Accrington this year.

Having organised a couple of small-scale events in the past myself and understanding how important sponsors are in the success of those events, I knew that such a large-scale event could not take place without the financial support and involvement of key players in education and businesses; particularly local ones with a genuine interest in the success of their town. Keen to know what their reasons for sponsoring Accrington’s Countdown to Christmas were, I went to have a chat with main sponsors, Duckworths Estate Agents and Accrington and Rossendale College. 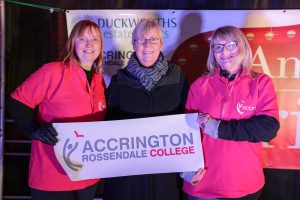 Gail Mitchell, Business Engagement Advisor at Accrington and Rossendale College, said: “Nights like tonight really help us get into the Christmas spirit. We chose to sponsor this event as we are keen to get involved with the community as much as we can. People are really embracing the idea of the new courses we are offering at the college and we’re expecting a huge influx of new students in the next academic year which is so exciting. We believe that being involved with such events will create more of a community connection.” 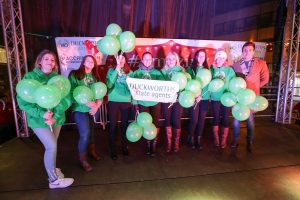 I went to sample the free mince pies and mulled wine that Duckworths had on offer at their shop. Whilst there I spoke to Jennifer Taylor, Manager at Duckworths Estate Agents, about their reason for sponsoring the event this year. She said: “We chose to get involved for both company and community reasons. We celebrate our 140th year this year and it’s thanks to the people around this area that we have been so successful; we want to make sure we give back. It also gives us a chance to get the lettings and sales departments together. After the success of last year’s event, we knew it would be a missed opportunity if we didn’t sign up to do this.”

Upon leaving Duckworths Estate Agents, I looked across the road by Accrington Town Hall and saw revellers rejoicing in the twinkling town as flashing lights illuminated Broadway for the evening. Children were given the chance to be in their own wonderful wintery world inside a super-sized snow globe in the town centre – an amazing addition to the incredible entertainment already on offer. 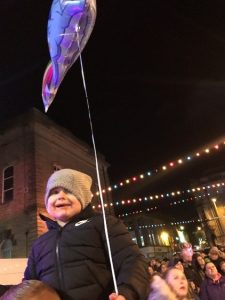 On my way over to have a look at the snow-globe, I bumped into Charlie Proctor, who pushed the plunger in 2016. With a cheeky smile on his face, Charlie told me how he’d had my boss, Murray Dawson, running around looking for a balloon for him after he originally bought him the wrong one! Charlie appeared to be quite proud that he had grown-ups searching high and low for a balloon, relishing in the moment with a mischievous grin on his face … Cheeky Charlie.

An event in Accrington wouldn’t be complete without the support of local football team, Accrington Stanley. As I was saying goodbye to Charlie and his family, I turned to see Goalkeeper, Max Stryjek, and the team side-kick Winstanley on the stage thanking the local community for their support for, not only the football team, but Accrington town. Max told the crowd how proud he is to be a part of a football team that cares so much about their town, and how excited he was to be at the Countdown to Christmas event that he said “celebrates #AmazingAccrington’s community spirit.” 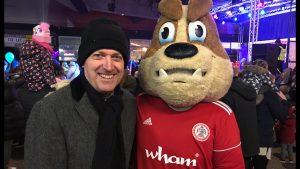 When they left the stage I noticed Winstanley had bumped into the leader of Hyndburn Council, Miles Parkinson. I had to capture this moment on camera so head over to take a picture, only to notice Murray had got there before me! Miles was pleased he got his moment with the Stanley Mascot. A quick chat with him showed the success of the evening: “What a fabulous live event! Over 9500 people gathered on Broadway to start the countdown to Christmas in #AmazingAccrington!” 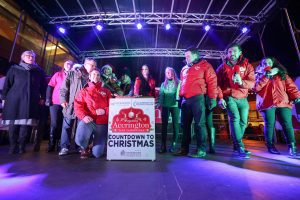 After my chat with Miles (and Winstanley), I looked across to the other side of the 2BR stage and saw radio hosts Tatum, Mike, Paul and Olly. Keen to get an insight of their take on the night, I headed over to them to see if they had time to talk. Upon being asked how they thought the event was going so far, Tatum said: “I’m especially excited because it’s my first year here with 2BR hosting the Countdown to Christmas event in Accrington. I think it’s going great. It’s definitely got me into the Christmas spirit!” 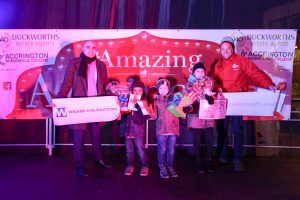 Winners of this year’s Christmas Card Competition also got their moment of fame on stage as they were presented with their awards from sponsors Walker Wise Solicitors. The Christmas Card Competition had been hosted by the #AmazingAccrington magazine – it was a chance for children to bring their imagination to life and create a cracking Christmas card to be printed for their family and friends. Zahida judged the competition and said she found it really difficult but thought the winner, Gabriela, had created the cutest card that helped her get into the Christmas spirit. When I asked her what the most difficult part of judging the competition was, she jokingly said parting with a crisp £50 note from Murray … before adding that Gabriela was certainly worthy. 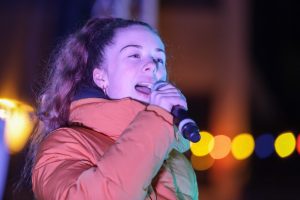 From performances off Britain’s Got Talent’s Mr Zip and Ella Shaw; The Voice Kids’ Brooke Taylor; and Black Lace throwing it back with their hit Agadoo; to Coconut Shy with Duckworths and spinning fairground rides, there truly was something for everyone to enjoy. See video here *insert video link*

When we asked Clare Cleary, Cabinet Member for Accrington Town Centre, why this year was such a success and the biggest to date, she said: “The Christmas Countdown was a real team effort with fantastic collaboration from Hyndburn BC staff, Leisure Trust Staff, Scott Dawson Advertising, the 2BR live stage team, the police and the police cadets / Accrington and Rossendale College students. Everyone involved gave it their all and the hard work on the night and in the months leading up to it led to a very well organised safe event. When people know they’re going to be in a safe environment they’re more likely to attend. I think all of this sets #AmazingAccrington as having the premier Christmas event this year.” 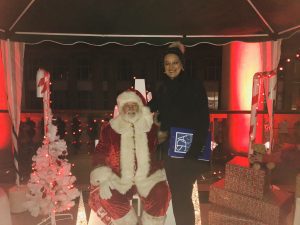 The highlight of the entire night for me was being surrounded by some of the team from Scott Dawson Advertising. Being away from Headquarters and in the heart of the community for the Countdown to Christmas had Murray, Zahida, John, Yann and I relishing in the festive fun (so much so that I came in to the office this morning to a 6ft lit Christmas tree beside my desk!) Seeing all the hard work and effort put in to the organising of the event by everyone involved, the determination to get the perfect pictures by Photographer Yann, John updating social media platforms live by the minute, and Murray mixing with the audience and drumming up excitement (as well as buying cheeky Charlie balloons) was the epitome of what Christmas is about …

Coming together, creating magical memories, teamwork and, of course, having fun. 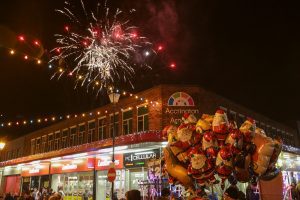 The evening culminated with a spectacular show of fireworks lighting up the night sky above Accrington in a colourful extravaganza. The ‘snow’ fell and children gazed in wonder as parents smiled in awe …

See videos of the night below: