Sophie Hambling, 3rd year Photography student at the London College of Communication, was born and raised in #AmazingAccrington and takes great pride in the NORI brick heritage the town holds. 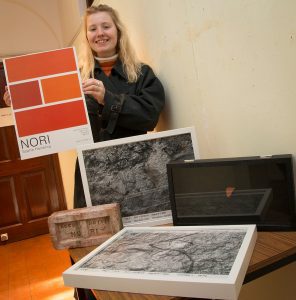 The NORI brick isn’t just a building material to Sophie, as it would be to most. “It’s a part of my identity,” she says, “people become interested when you tell them that the NORI brick, created in our world-famous town of Accrington, was used to lay the foundations of the Empire State Building in New York. It was seeing this interest from others that helped me decide to lay the foundations upon which my future lies on the same thing. This is how my final year project came to be – NORI.”

Sophie has always taken an interest in building materials and the industrialisation of the environment but said that her unexpected encounter with NORI brick at the Natural History Museum in London had her wanting to explore it more.

Eager to merge science and photography, she took a NORI brick to an electron analyser at the Natural History Museum and studied a piece of it: firstly, to find out the elements of the brick and secondly, to take pictures of it.

Producing images in only black and white, as the electron analyser doesn’t transmit any colour, to the untrained eye the pictures could have easily been mistaken for pictures taken of clay … mud, even. But there was something about these images that captured the eye; even more so when Sophie went on to explain what they were depicting.

“These images show the content of the bricks. With NORI bricks, we can see that they have a much higher level of iron in them than others created outside of the region. This makes it stronger than other bricks. You can see this is quite clay-like; the brick as you’d expect it to be structured during production. It doesn’t lose any of its stability and this fascinates me.”

“It’s used in many famous places, often in the foundations. The strength of the foundations of any building is paramount and the NORI brick being used in world-famous landmarks is absolutely testament to how strong it is.”

Thoroughly enjoying both photography and the science behind it – the technicality of producing images is more complicated than most would imagine it to be – Sophie revealed she would love to spend her future taking pictures of interior architecture: with her love for buildings and industry almost being on par with the beautiful images she creates.

Seeing Sophie’s eyes light up when talking about the NORI brick and how important the strength of a building’s foundations have mirrored the reason she had come back to #AmazingAccrington to display her work at Howarth Art Gallery for an exhibition – she had returned to her foundations.

The NORI was first produced at a brickworks adjacent to the quarry in Whinney Hill, Altham, by the Accrington Brick and Tile Company Ltd. The clay there produced bricks of the highest strength and hardness, as well as being acid resistant so is of use in flumes and chimneys. There is a popular theory that the NORI brick name came about accidentally; originally IRON, the mould is believed to be put on the brick the wrong way round.

Sophie’s final exhibition of NORI will take place on May 30th, 2018 from 6pm – 9pm at the London College of Communication.