It is 21 years since the birth of Globe Enterprises Ltd… an entrepreneurial partnership between businessman Stuart Nevison, Barnﬁeld Construction Ltd and Hyndburn Borough Council.

Their story starts with a breathtakingly brave renovation of a vast industrial site which lay in ruins and continues today with a portfolio of thriving oﬃce, manufacturing and leisure spaces located across Hyndburn. 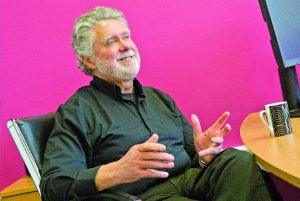 The partnership’s ﬁrst and ﬂagship venture was the Globe Centre which blossomed from the iconic remains of the mighty Howard & Bullough site.

Today the Globe Centre thrives as a business hub and home to dozens of companies both large and small with oﬃce space available from 219 to 2744 square feet.

Inside tenants enjoy the use of ﬁve conferencing rooms (also available to hire for non-tenants), onsite catering and a gigantic car park, all within a heartbeat of the local train and bus stations.

Inside this magniﬁcent space, modernity meets heritage. There are 32 rooms – or business units – with huge windows, vaulted ceilings and restored cast iron beams and pillars, locking in all the historic architectural charm of this beautiful building.
It was quite a diﬀerent story in 1996 as Stuart Nevison, the Chairman of Globe Enterprises Ltd recalls: “I remember quite clearly the ﬁrst time I walked into the abandoned building.

“It was obviously massive – this had been where Howard & Bullough designed, manufactured, engineered and exported mill equipment to the entire world.”

In the prime of its business life, Howard & Bullough was a key player in the industrial revolution and housed more than six and a half thousand employees in the building – all who were paid cash from a giant walk-in safe which was discovered during the renovation.

“The safe was massive,” adds Stuart. “Just like the building itself. There were over a million square feet of ﬂoor space here. Many areas of the buildings were semi-derelict, certain parts like the main part of the building here had a great appeal with the stone façade on the other side of the property and there was a determination to try to save this main building.” 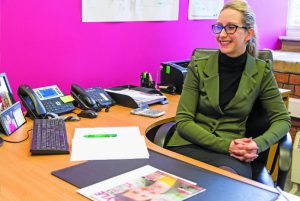 As one of Hyndburn’s earliest business centres oﬀering rented space, the Globe Centre is a three-way venture between the private and public sector with Stuart, the borough and Barnﬁeld Construction Ltd., all being equal shareholders.

Adds Stuart: “Globe Enterprises came into being after I ended up with the old Howard & Bullough site and didn’t know what could be done with it.
“I met with Tim Webber from Barnﬁeld and Hyndburn Borough Council who had ideas of a business centre, and all our thoughts were pooled.”

For the construction coalition, there were no other local business centres on which they could base their market research. In short, they didn’t have a clue if there was a demand for what they were planning to build!

Embarking on such a huge project was quite a gamble and as such must have been a daunting one? “Oh yeah! It was frightening, it was really frightening, ” laughs Stuart.

After consulting the council’s plans for the centre, Stuart and Barnﬁeld Director Tim Webber, stood outside and compared notes. “It was just exciting that we both had very similar feelings about what might work here and how we could make it work, ” adds Stuart. “So a lot of the building was demolished, but there were plans put in place that if we were successful with the ﬁrst part of the building that we could add on to it in a very sympathetic style new build. And that is exactly what we did. ” 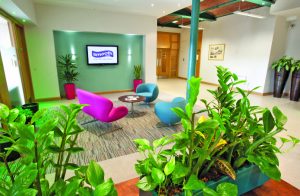 In what must have been a magical moment in time for the three-way partnership, businesses ﬂocked to view the majestic new Globe Centre, located in the middle of town with links to the North West’s major motorway networks.

Says Stuart: “The Globe ﬁlled quicker than any of us thought it would and as well as people like Airtours we had Expedia and the Lancashire County Council’s telephone call centres and BT’s call centre on the site, who are still here and have announced a major recruitment drive to the area. ”

In addition to the large amount of square footage at the Globe Centre, there’s everything down to a one-man oﬃce if required, as the Globe Centre’s new manager Nikki Holbrook explains: “The ﬂexibility of our space is very appealing to business users. Another bonus is that a lot of the help associations that small business and big businesses rely on are based here. They include Hyndburn Enterprise Trust and Growth Lancashire and tenants can wander out of one door and through theirs for help and advice on their doorstep. ”

One of the latest businesses to join the Globe Centre family is Kleeneze a multi-level marketing company which started life in Britain 1923.

Nikki, who became Globe Centre manager four months ago and previously worked in the building for a tenant, adds: “Kleeneze was bought by an American company from Express Gifts, and as such had decided that they wanted to stay in Accrington and to evolve their presence here. They are moving into roughly 14,000 square feet over Easter weekend. There will be very little disruption for the workforce again being in the centre of the town where they were previously based. ”

Adds Nikki: “You’ll see a wide variation of businesses throughout the building. From the beginning, the partnership was very keen to have the communications sector here. They wanted to appeal to the growing call centre type of businesses and were very fortunate to start with Airtours back in the day. Ever since then this whole site has had a huge number of people who rely not only on communications by high-speed data that’s available in ﬁbre optics but in the communications where their staﬀ can get oﬀ a train or a bus and walk into the building.”

The Globe Centre quickly gained a good reputation with the people of the town and from market traders to car dealers, bringing more trade to the area with an ever-increasing workforce. And as businesses grew so too did their space within the Globe Centre. 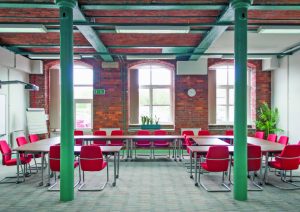 Says Nikki: “We’ve actually got businesses here that have become very successful and have even thought about moving out into their own buildings. On reﬂection have decided to stay and grow and expand within the building. It’s nice to know that people are happy to come here to work. People don’t want to give up such a beautiful building whether they are expanding or downsizing. ”

For the partnership, the highlight of the Globe Centre project is winning and continuing to win all the business that has gone into their portfolio of space, which includes two other sites: The Chambers, Town Hall Square, Great Harwood and Waterside Business Park, St James Street, Accrington.

And the enthusiasm is reﬂected in Globe manager Nikki who says: “As someone who worked in the building for three years prior to becoming the manager here, I really can speak from a tenant’s perspective. Although working in my own oﬃce space I really did get the feeling that I was part of a greater community. It is homely and a lovely place to be every day. ”